“I can’t help it,” said Ruby pitifully. “Even if what you say about heaven is true – and you can’t be sure – it may be only that imagination of yours – it won’t be just the same. It can’t be. I want to go on living here. I’m so young, Anne. I haven’t had my life. I’ve fought so hard to live – and it isn’t any use – I have to go – and leave everything I care for.”

“Anne sat in a pain that was almost intolerable. She could not tell comforting falsehoods; and all that Ruby said was so horribly true. She was leaving everything she cared for. She had laid up her treasures on earth only; she had lived solely for the little things of life – the things that pass – forgetting the great things that go onward into eternity, bridging the gulf between the two lives and making of death a mere passing from one dwelling to the other – from twilight to unclouded day. God would take care of her there – Anne believes – she would learn – but now it was no wonder her soul clung, in blind helplessness, to the only things she knew and loved.”

– on the death of Ruby, Chapter 14, Anne of the Island, by L.M. Montgomery

We all certainly have our own vision and idea of heaven, no doubt to be put to shame upon arriving there. But those imaginings are something we really all should have, in helping us to make heaven more real and kept at the forefront of our mind and heart through this life. If we don’t live for the higher things, what is there when we die? Ruby “laid up her treasures on earth only”, she never gave a thought to what lies ahead after death, or put effort into cultivating prayer and virtue in the hope of moving closer to heaven while still on earth. Naturally she was terrified to leave the only thing she knew. By striving to put our hearts, minds, intentions and acts a little bit closer to Our Lord everyday, we bring ourselves a little bit closer to heaven, so when the time does come to die, it doesn’t seem like such a far off, unfamiliar place. If we pray, ponder, and live for what comes after death, surely death will come as a welcomed friend – like waking from a dream to finally enter the reality we were made for: heaven. 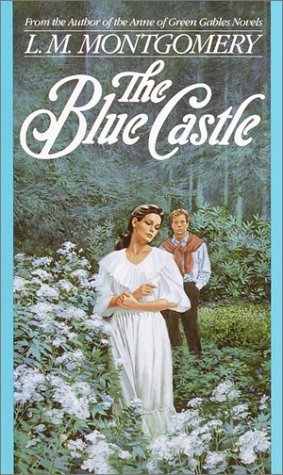 The past few weeks have found me absorbed in Anne of Green Gables. Feeling the need to take a break from a rather sad novel, I was propelled towards the happiness of the Anne series. So I re-read a few of them once again, and I’ve been in an entirely Anne mode the past few weeks because of it. Keeping with Montgomery’s style, I picked up a copy of another one of her books, “The Blue Castle”, recommended by my sister, Library.

Valancy Stirling is 29 years old, unmarried, and living under the strict thumb of her mother and aunt. She has never had a beau, she has never traveled, she doesn’t even have friends. She spends her time in obedient dullness, forever holding back her real thoughts, opinions and desires, due to her snobbish, mundane, and difficult family clan. Her only happiness is escaping to her “Blue Castle” in her fantasy world.

But one day, Valancy receives the fatal doctor’s note, informing her that her recent heart flutters are signs of a bigger problem, which will one day claim her life – most likely within the year. Valancy doesn’t fear death, but rather, she fears missing the life she should have lead. Out with propriety and in with her true self, she allows herself to say exactly what she thinks, and ends up leaving her mothers home to nurse a socially cast-out acquaintance – another young woman, closer to death then Valancy herself.

In her new position of nurse, housekeeper, friend and companion, Valancy finds purpose. She finds joy and meaning in the serving and nurturing of others. She also meets Barney Snaith, maverick of the town, who lives alone on a little island, keeps mostly to himself, and drives around in his old big loud car. A wide range of speculations assumed to be truth by the town say Barney is a criminal, murderer who fled from justice, a cheater, a liar, a psychopath. Valancy defended Barney to her relatives before ever having met him. Somehow she instinctively knew none of this to be true about him. When she does meet him, she discovers she was right. Friends with the old man & his daughter whom Valancy lives with & works for, Barney quickly becomes a regular presence in Valancy’s new life.

We get to know Barney through Valancy’s eyes. He is good, honest, doesn’t speak much about himself besides the tales of his various adventures around the globe. He is thoughtful, always stopping by and asking what she needs from town before heading there himself. And he’s protective, driving the distance to an “up back” party he was told Valancy would be at, but which he knows will be unsafe for her – and gets there just on time to pull her out of a harmful situation. And yet, there is so much mystery surrounding Barney Snaith – we know nothing about his past, why he is the way he is (until you keep reading, that is).

When her companion dies, Valancy finds herself clinging onto this new life she’s made. One day Barney comes upon her in the garden, and Valancy asks if he will marry her, knowing full well that he doesn’t return her love, and assures him it won’t be for long, since her life will be claimed by death, most likely before a year has passed. But Valancy can’t bear the thought of returning to her mother’s house and living once again in the prison of propriety, the childish obedience demanded of her, and spinster-hood. Barney agrees. He acknowledges that he doesn’t love her, but likes her well enough, and would be quite content to bring her along to his island, if that’s what she truly wants.

When Valancy first sees the little house amoung the pines, she sees her Blue Castle, in real form, for the first time.

…there’s more to the story… but I won’t give any more away.

Barney’s character is one I really appreciated in this story. It was evident to me from the start that there was deep hurt in Barney’s heart, that he had somehow been on the receiving end of severe unkindness in his earlier years, hence the living in seclusion. But his naturally kind, gentle, thoughtful character, remains. Despite his past (which we know leaks into his psyche from the occasional cynical remark, and his emotional reservation) his soul thrives on the good, the beautiful, and he never fails in his goodness. In some respects, his character doesn’t change from beginning to end – he is always constant, dependable. But in others, he does. Being on the receiving end of love, being cherished and respected by one he also cares for, allows his character to develop in a way it yearned to in his younger years. It unlocks the natural joy in his heart, he is finally, in a way, set free.

I also appreciated that Valancy finds purpose in a life of service for others. Never being allowed “idle time” in her mother’s house, she spent countless hours sewing, quilting, keeping her hands busy, but all with fairly superficial things that were simply stored away up in the attic for future use. She may have been using her hands and skill, but it was idle in another sense, in that there was no food for the soul coming of her work. But when her hands go to cooking, cleaning, caring for others in need, she begins living with a type of vigour, satisfaction, and joy, that only comes from serving others, where you know you are needed.

This book is another treasure, to be kept on the shelf, and pulled down when some warmth to the heart is needed by a good book.

Nota Bene: Although it may seem like this is pretty much the whole story, it isn’t. This is only some of the first half, and there is detail, character development, and over all beauty in this story that can’t be captured through a re-cap. So it’s definitely worth a read!

…open to life and love

I just read this article. SIGH. Sometimes I question the human beings level of logic. Or rather, it just proves the lack-of-logic by pro-abortionists, yet again.

Why in the world would you use Anne as a pro-abortion figurehead? Obviously whoever had this brilliant idea *sarcasm alert* has never read the series, and possibly mis-construed the meaning of the movies (if they’ve even watched them!). For those who haven’t read the series, (WARNING: SPOILER ALERT!) Anne and Gilbert marry and move across the island where he sets up practise. Anne is over-joyed when she becomes pregnant, and all her time goes into preparing for the arrival of the new little life inside her. But tragedy strikes when little Joy is born weak and frail, and lives only a few hours. Anne is grief-stricken, her heart is broken and she has little hope in the future, because it seems her future was taken with her little daughter. Anne, as we know from her past, draws the love out of everything around her, so she works through her grief with the help of her devoted husband. Eventually Anne bears her second child, a son. Then another son. Then two daughters, then another son, and finally another daughter. As we watch the Blythe family grow through the years, it is love that binds them together. Love for one another, love for their home, love for their town, love for their friends, love for life itself. I don’t need to say much more, as it’s well put in the article.

So, pro-abortionists, where do you arrive at the conclusion that such a life-loving and generous character such as Anne Shirley would be a good figurehead for your selfish life-destroying agenda?

Please, do inform me, as I’m reaching the conclusion that your ignorance in classic literature is yet another sad piece of your ignorance about life.

A teachers tales of laughter and amazing little minds of those she meets.

Blog of the Courtier

Essence of an Extrovert

"Life is a journey, not a destination" - Ralph Waldo Emerson